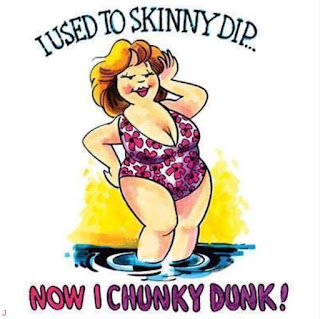 Two weeks ago my efforts to lose weight fell by the wayside. One night, we were up at about 3:00am drinking tea and eating copious rounds of toast with butter and homemade marmalade.. so we were way over the extras that SW (Sliming World) allow, before the day had even started!

So last week and the start of this week, we've been strictly on plan. Dh does the cooking and we've had some very tasty meals that filled us up, so we didn't snack later in the evening.

One of my favourites is Chicken Kiev, with a baked potato and a full salad; the tomatoes are from the garden, grown by me.

And followed by a pud which was cherry clafloutis, which is made with quark, fluffed up with egg white. Really delish and we have squirty cream with it.

So a very tasty meal, altho I don't snack, but sometimes I just fancy something. One slimming consultant gave an example of what happens if you think you're hungry and you go to the fridge and all that was in there was raw liver, 'would you eat it,' she asked..'NO, so you weren't hungry just fancying'  she said, but if it was pigs liver and I could just sear it in a pan, I'd have eaten it!!
Kuchisabishii... this could be me, it's the Japanese word for 'lonely mouth!!' Do you  have kuchisabishii?
Chrisxx
Posted by Chris at August 14, 2022

Oh yes! My problem is food waste. I bought some bananas (healthy snack) and they went soft in the heat after only a day. As did my elderly neighbours fruit."Can you throw them in my in for me?" she said "Can I bake them instead?" I replied. So I made two lovely banana loaves. I froze one, took her just a couple of slices, as she requested ..and served some to visitors. But we've had cake for 3 days now... And read is toasted because it dries out so quick in the heat. Your chicken kyivs look tasty tho

Lonely mouth - I rather like that!!
We all have days like that, I think. Getting back on plan is perfect - good for you. xx

You're cherry clafloutis looks yummy but then I do have a sweet tooth, give me a dessert any day over a starter. I manage to keep my weight steady so I don't think I have kuchisabishii.

Give me snacks any day! I prefer snacks to regular meals!