I have been invited to join the new LHN sal, so I have ordered my chart and floss and hopefully I will be all ready to go on November 1st...wahooo I am raring to go! Come and join us? 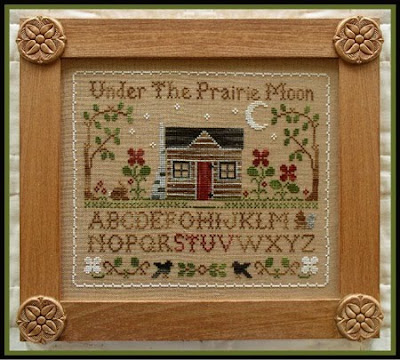 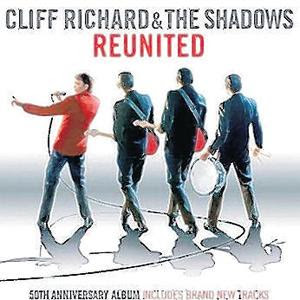 I am back after a lovely weekend but tiring! Must be my age erum???
Linda and I had booked this trip in November so we were really looking forward to it as it was her birthday on the Saturday. It started like a damp squib, as the coach was an hour late. We were relieved that there were others there waiting too otherwise we would have thought we were at the wrong place! Then it was so disorganised... there were supposed to be ‘comfort stops,’ but because it was late the courier suggested that we went straight to the hotel which was not in London and was only three quarters of an hour away, but several people who had been on that coach for three hours before it got to us said they wanted to stop. So we did at Stanstead services.
Linda and I had our picnic, smoked salmon and treats so we were alright! Then it was off to the hotel which was in Old Harlow in Essex, way out of London??? But it was a superb hotel,one of the Swallows chain; it was very comfortable and we did have a very, very yummy full English breakfast on the Saturday, which we wouldn’t have had if it had been in London.
Then off to O2 area. We made better time than was anticipated so we had loads of time and went for a snack meal at this ‘Eat the Latin Way’ Restaurant and very nice it was too.( I am dreading weigh in at my slimming group on wednesday!)

So then the show!! What a to-do! Cliff and the Shadows were wonderful but our seats were dreadful. They were on level 4, right up horribly high in a stack of side seats. We could hardly see the stage we were so far away, let alone people on it. But no matter there was a screen except that there were these huge sound thingys hanging down in front of our view so we couldn’t see a thing! We saw lots of people all filing down past us and going off to find different seats. So at half time we found someone to talk to and I made a fuss. I overheard someone saying there were free seats next to them, so I grabbed Linda and in front of some other people rushed to these seats for the second half, and it was wonderful. Quite a few people in our group didn’t move but then they didn’t have me at the helm making a fuss!

On Saturday, we spent the day in London and Linda and I went to Covent Garden, mooched around, and had a wonderful day! I bought a scarf; well a girl can’t have too many scarves! Just need a nice grey coat to go with it, so off to Stratford on Thursday to get one, M&S have just the one I want! 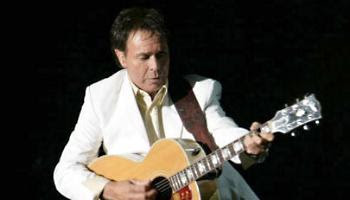 I can see Cliff looking older but I still love him and have done for 50 years!!Sigh!!

Labels: Weekend away with a friend

I wanted to do something for Clare's church christmas tree but hadn't seen anything suitable then I found this in an old magazine.. 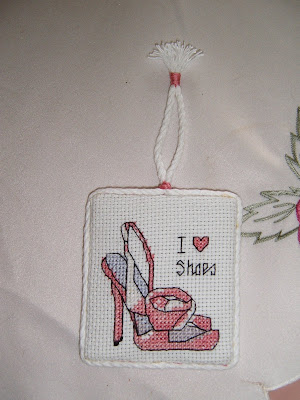 In my usual rush to get to the post office I packed this up and posted it off last week with a whole lot of stuff, but then last evening I was looking up some one's address and horror of horrors I thought I had posted this to the wrong Clare so had to phone her(still had her number written down from the stitching day back in march) And it had arrived! Whew I thought a senior moment had caught me again!!
This year we will make time to see the tree at the church at Christmas time.

Autumn cushion ornie and a Pin cushion and fob

This is the Autumn exchange for Sharon in Exchange Heaven, it is hanging ornie cushion. A JBW design on 28c Even Weave and I used Victorian Motto Sampler Shoppe HDF, colour pumkin 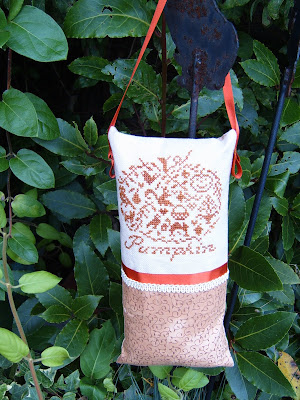 And my second is my All Year Prairie School exchange which has arrived at last, I was beginning to get quite worried as it was sent with another package to the same country and it hadn't arrived. It was such a relief.(Not a very good photograph I'm afraid)

Wendy says she likes it so I am pleased too.
It was a pin cushion and scissor fob all stitched on 28c Jacobean Even Weave,with DMC threads. 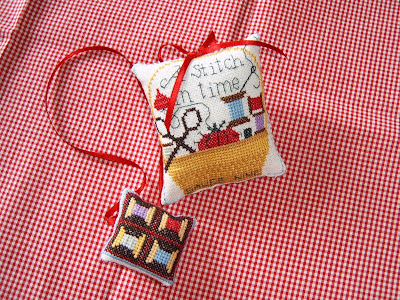 Both were lovely to stitch and of course I had two lovely exchanges back.
I have decided not to do another PS exchange before christmas and after the next Exchange Heaven item I am ducking out of exchanging for a while as I have some other things in the pipe line.

It was such a dull grey day when we opened the curtains this morning so isn't it lovely when your DH comes to you with the post and says... you've won in the post stakes today and there is a package you were'nt expecting??? I had sent off my Autumn exchange when we were away so I had forgotten I still had mine to come, so it was such a lovely suprise.
It is wonderfully made and beautifully stitched and I love it.
Thank you Elisa, it is so lovely and shall be finding a front position on my shelf of exchanges. 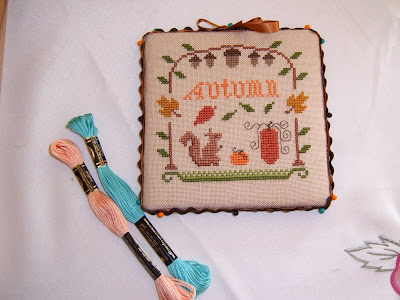 And the thread she sent is colour coordinated with the pins on the side, so neatly finished too. The design is lovely and the colours so subtle, thank you again Elisa, your stitching and finishing is perfect. 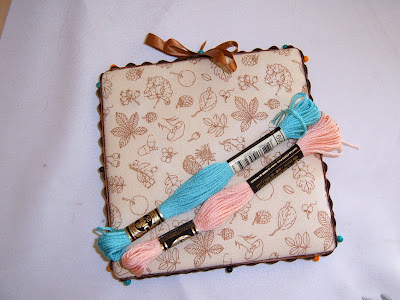 She has said it is a Helga Handl design, DMC threads and stitched on Quaker cloth in Light mocha.
I think I will have to buy some of this cloth it is such a lovely colour.

Back from our holiday

This was the view from our cottage and what we woke to see each morning, wonderful isn't it and only 91 steps down to the harbour!! I puffed a few times climbing back up but it was worth it. We had a wonderfully relaxing week and ate well!! erum diet?? We enjoyed crab sandwiches, scones with strawberry jam and thick Devon cream and the most yummy fish and chips, so isn't eating what you like part of a holiday??? LOL So its back to the food plan and a hope that the weight hasn't increased too much! 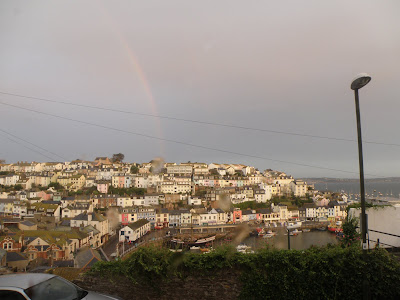 Our cottage was very comfortable and catered for our every need, poor Nell had 19 steep steps to climb each morning for a wee. It was warm and very comfortable and we wanted to stay another week. I watched the world go by sitting on a bench by the harbour most afternoons and the sun shone every day. A really lovely holiday. 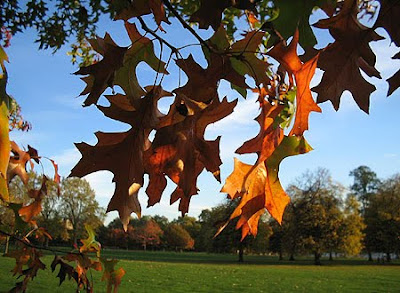 Autumn is here, I don't want it yet...but all the signs are there, summer is on its way out. We have had boundiful < is there such a word??) crops from the allotment and our pantry is full of jams, chutneys and pickles as well as wine! My DH makes a very nice crispy fruity white as well as a rather nice red.
Here is a peep into our pantry! 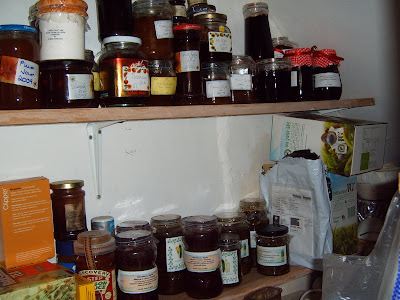 We have damson and blackberry wine nurdling away in the corner and our shelves are buckling with, marrow and blackberry chutney, bean chutney, cougette chutney and courgette pickle as well as jellys and jams. 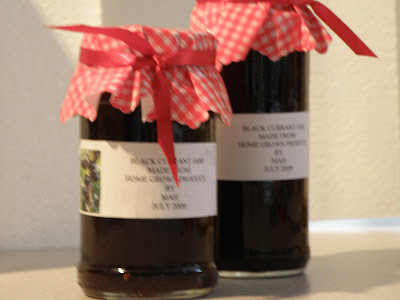 And of course all in the dark under the stairs are strings of onions and bags of potatoes. Plaited garlic hang from our kitchen shelf ready to frighten those vampires away!! LOL
Life is busy and growing it all is very satisfying.
Stuffed squash for tea the other evening with sliced runner beans and potatoes and we still have carrots to come. We will need to make some tomato chutney both red and green before we are away for a weeks holiday next week and Mike wants to do sloe gin, all ready for christmas.. I thought I was on a diet!! Ah well there is always next year! 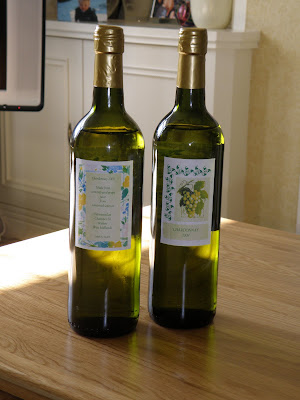 The swallows and the swifts may have left us but our cheeky little squirrel is back on the bird table and the bird seed feeders are swinging with all the green finches, tits and sparrows as well as the robin gleening underneath.
The skies are red at night and the leaves may be turning yellows and reds but isn't there plenty to feast your eyes on as the seasons change. 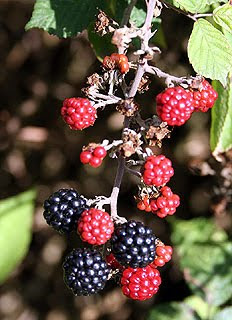 Labels: Feasts from our allotment.

This sweetest little needle case arrived this morning all the way from France from Elizabeth. The stitching is minute and it is amazing.. The finishing is superb and I love the colours of the fabric, kinda Laura Ashley! I just love it..and it will be with me in my stitching bag next week when we are on holiday in 'cream tea country!!'
Thank you Elizabeth, this has made my day. 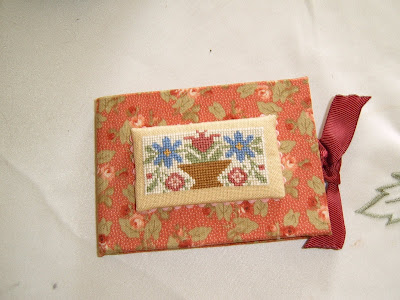 This just arrived in the post from Lorna, it's so pretty and actaully we needed that saying in this house!
Thank you Lorna I needed to be reminded that;-
Home is where we share... and Love... and Grow! 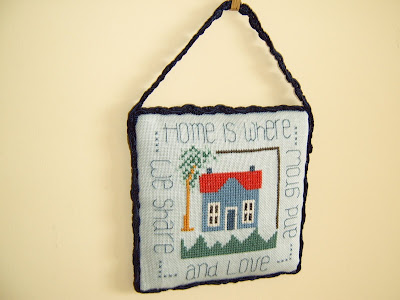 Its my life and its a good one!!

I have got up this morning and have decided that This is My LIFE and I am the one who decides how my days will be..... so I am having a good day and no one else will determine by their actions what sort of day I will have .... and it has started off well because Kathy in Ontario has received my pressies for my blogoverary. I am so glad it arrived and that she likes it.
It is a Needle Case, a Scissor holder and a Scissor fob. 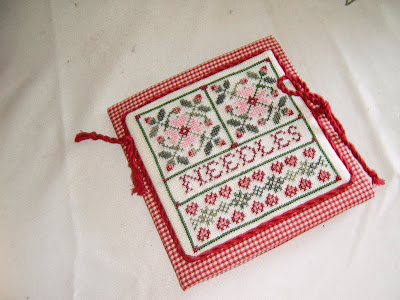 This is the Needle Case, the design is Blue Ribbon (suprise suprise!!) called 'Hugs and Kisses', stitched on 28c even weave, Antique White colour and the recommended DMC threads
I loved stitching this and would have loved to have included a little scissors but I know from an exchange group that including such things can be stopped at Canadian customs and the parcel opened and things lost, so sorry Kathy! 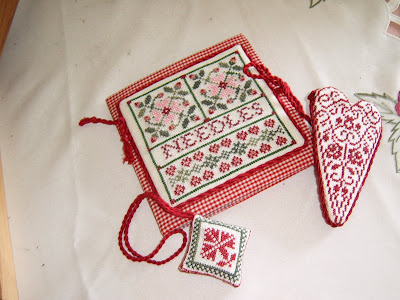 Its so nice to stitch for some one else, so I am looking around for my PIF recipients for something really nice!
Thank you all for your lovely comments and all the emails, I am hanging in there and appreciate all your kind thoughts and prayers.
Have a good day all I am!!