Happy New Year everyone and a healthy one and I hope that you will receive many blessings through out the year.

..... for your advice and suggestions.. 15 mins sounds a bit too short a time for me, it would take too long. However one evening a week would probably suit me better. I could cope with that.
So this design will stay in my WIP bag and I will post once a month on my progress.
Thank you too for the yuku forum I think  I will look at that..

So Chatelaine I will not be beaten!  I did have an  email from someone who  paid twice what I paid, it seems over the years it has gone up considerably. I must have bought this 6 years ago. I can't remember! When I bought it I loved it, although I  was a bit dismayed by the PDF doc print out but enlarging it on screen works a treat

So Happy Stitching All

Help I hate it! 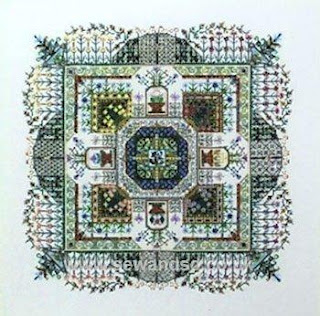 Am I the only stitcher to have done this?  I bought the whole pack of Chatelaine’s Convents Herbal Garden, the chart, the HD linen, all the silks and beads at considerable cost and I hate it!


It started to go wrong when I couldn’t see what was stitches and what were beads on the printed out chart which came as a PDF document.. Other stitchers suggested to enlarge the chart on my laptop screen, and then print it off or even work from the screen. My DH and I had a frustrating morning trying to open the PDF doc. because I couldn’t remember the pass word. Then inspiration I suddenly thought what would Martine have given me as a password personal to me.. ah-ha my own email addy and it opened. So it is easier to see the chart now and I have stitched the middle section but oh how I hate it.. anyone got the answer to spur me on?? 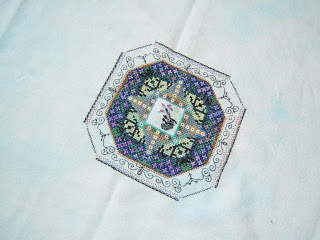 I need help, I can’t just scrap it, it cost too much!

I am very proud of my efforts because I have stitched these each month. I have two more to complete and thats  what I am stitching and finishing off  this weekend, if I have time.
My step daughters arrive tomorrow for Christmas and tomorrow night we are joined by my DS and DIL.. He phoned this afternoon to say that they could pop in tomorrow evening for a bite to eat!! Criky I thought obviously I don't have enough to do.. I only have the cake to ice, mince pies to make and now a meal for six tomorrow night! 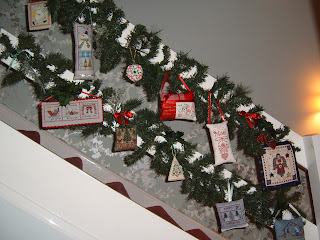 And here is my little helper. While DH has been away, we have walked every afternoon, just before it goes dark.
and then, this is where she is...... resting on her blanket and her little 'LOVE' pillow we bought her last Christmas.! 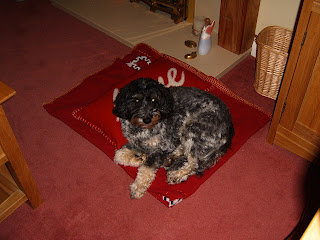 Thank you for all the encouragement on my weight loss,  it helps me to keep at my food plan, I am going to try and not put on a whole lot of weight over the Christmas period as I have done in previous times. We have a weigh in on the 27th Dec. so I hope it won't be too bad!

Happy Christmas all.. I hope its your best one ever.

Well after all that eating the  weekend of my party I was dreading my Wednesday weigh in, but by some miracle I lost a pound! Spurred on I decided  I would keep to the plan and try to lose again this week. Saturday I wasn't well. So I saved some calories, because I didn't eat. But Sunday I had the dinner at the Albert Hall. Of course being a posh meal the servings were very small,  and worried if I drank all the wine we had been given, it. would make me sleep though the concert. I only drank the champagne and sipped a little of the wine.  Yes .....I can go to sleep after just one glass of wine!!
But this week at our Slimming World meeting, it was a taster session where every one brought some thing to eat. I had tried to find the web site of the 'Cake Lady' as I had heard about this almost syn free sponge cake.. however
it seems the cake lady had to remove her website,  because her SW syn values were challenged by SW ! But here is a super site and the almost free cake is wow!   www.lowsynlife.com

I tasted it this morning and it was absolutely delicious. The woman who had made it cooked it in a swiss roll tray (I am off to buy one this afternoon) Then she had cut it in half long wise, spread it with the fromage frais sweetened and then berries and then put the other half on the top with more fromage frais and berries.. It was amazing.


The recipe I originally made to take was horrible. I think I had copied it down wrongly off the F/B page, so I made SW biscuits which should have had toffee yogurt and choc chips but they had gone in the first attempt,  so I used mandarin yogurt and zest of an orange and drizzled orange flavoured icing over them and then sprinkled more zest over them They were very nice and everyone wanted the recipe which is this...


A few drops of vanilla essence


Then add all other ingredients and make into a dough


Bake at reg 7 gas which is about 220 electric for 12 minutes or until biscuit coloured!


Drizzle with runny orange flavoured icing and some extra zest


Can you guess we have a super new zester which is so easy to use.

I wanted to lose 7 pounds in the last 6 weeks before Christmas but only managed 5 which is good for me. ( Weight loss so far 19 pounds) So I am losing weight albeit slowly. One woman in our group has lost 6 1/2 stone since February. Criky I thought what does she eat, not the same as me obviously!!LOL
I want to lose at least another stone before we leave for Australia in the middle of February.. with this in mind I have resisted all the mince pies and as yet haven't even had one, where as normally  I would have had at least one every day from the first of December!!
Happy days.. only 5 days to go...
Chris xx

Another bit of my birthday celebration

I hadn't realised that DH had taken these pics. The food was all delicious and altho' I had a nibble of every thing and  a big piece of birthday cake, 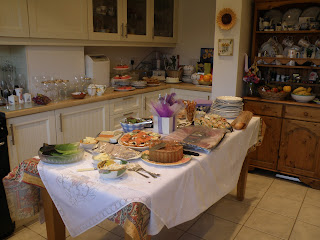 when I went to SW for my weigh in on wednesday, amazingly I had lost a pound! 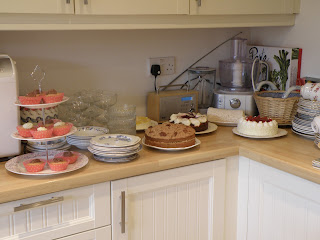 All the puds were delicious 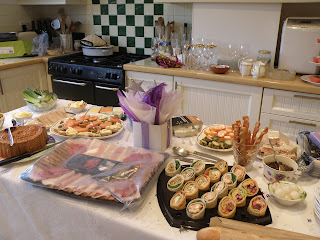 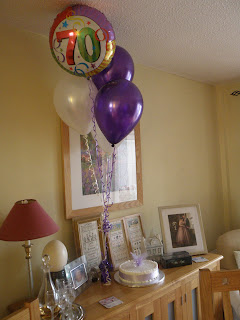 And it wouldn't have been a party without ballons!
I had a super time.
But my birthday treat was yesterday.
DH had booked a Carols by Candle Light Concert with a very posh meal before hand at the Albert Hall
He had booked this last July! The concert was lovely with audience participation for the carols, altho when the choir were singing Zadok the Priest and the Halleuia Chorus we could have sung along as we have sung these two pieces in a choir in Coventry!
It was beautiful.
The dinner was excellent but as I had had a tummy upset on saturday I just nibbled. The champayne was good, I managed that!
Now we are full steam ahead for Christmas..only 7 days 13 hours and 17minutes and ..10.. 9.. 8...... seconds to go.. yiphee!
Chris xx 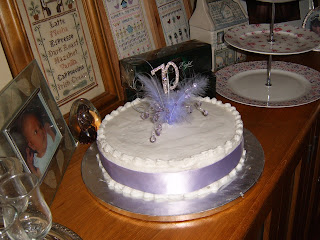 I have just had a party for my birthday which isn't until the 20th, but this date fitted in with members of my family. We had a lovely time, all 20 of us. Some of my friends came that I have known for years, well I would have known them for years as I am old?! I don't feel my age and still do everything I could do when younger, except now I take longer to get it done!
I made the cake myself; it is my Christmas cake recipe and is delicious. Mr Waitrose provided the party food and that was delicious too.

My friend gave me a lovely orchid and my daughter a pale pink camellia and I have lots of other presents to open when it is my proper birthday.. like the Queen I am having two birthdays!LOL

A present for my best friend

It's my best friends birthday tomorrow and I am visiting her for the day. She moved to Worthing 3 years ago, but we still see each other regularly. 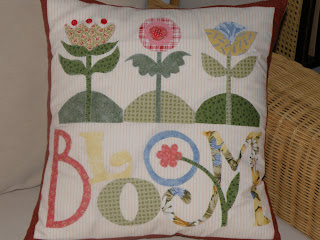 Each year I make her something for her birthday. This year it's this cushion.
It looks a bit white as the photo was taken with flash so the true colours are slightly darker.
This is the back with the zip through the middle. 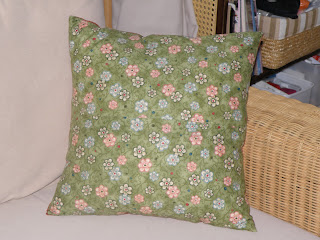 I have really got the sewing bug and this applique work is all machined on! I go to a sewing class on saturday mornings and the other ladies asked how I did it and my answer?  'Slowly!!' My machine has 70 odd different stitches and this was a blanket stitch made smaller and flipped for each side of the letters and flower stems. It is a work of heART! I hope she'll like it. She has a cane settee and matching chairs with green seat cushions so this should match it.
And I loved making it, I have started another one for me!
It's from a book called Garden Song by Nancy Halvorsen from her Art to Heart series. 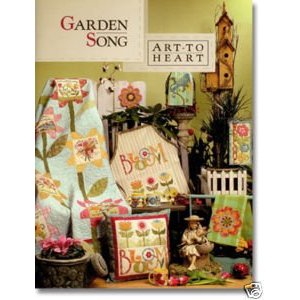 Happy crafting all and I hope you're looking forward to Christmas just like me!