A suprise in the garden.

We've spent a couple of hours getting the garden straight and planting all the seedlings I sowed back in February. We have the three flower beds, the one we dug first has most of  the plants we brought we us from Suffolk. Just snippets rather than whole big plants to reduce the number of plants to transport. We've dug two further beds all, all beginning to fill up with plants, as all that was here was grass.  So some of the plants that have popped up have been a pleasant surprise as I couldn't remember all I brought.. so this one was a surprise.

It had grown enormous and beside it is a rhubarb plant, an extra one which we didn't know where to put, so it was planted there by Dh for this year, so this large plant alongside was a surprised.

I've let it grow till I had an idea as to what it was. 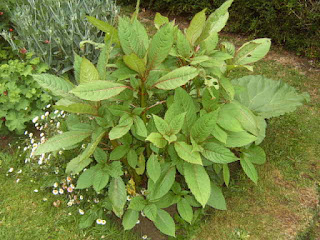 It's coming out tomorrow, as its Himalayan Balsam!

I had to google Himalayan Balsam but can see why you want rid!


Yes I have just googled it too and you would be well shot of this plant and its thuggish ways. Hope you have lots of success with your other plants though.
Glad to hear you are feeling a little better in yourself.