Tweeting or is it Twitching???

This is one of the Great Tit fledglings that Nell found yesterday evening down the side of our conservatory. 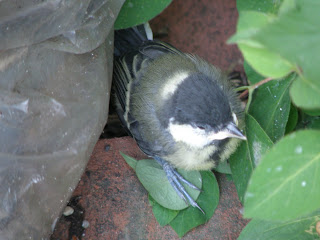 It was quite safe with Nell as she is afraid of her own shadow and was dancing around it barking. It kept tweeting for its mum and we could hear her answering.
We grabbed Nell and came in. Later on, DH saw it up in a hawthorn tree that borders our garden. This morning there is another one on the veg patch and one of the parent's with it, while the other parent is still feeding one inside the nesting box. One was lost to a horrible magpie thursday afternoon, I know is nature but so cruel! I just saw it too late land on the top of the nesting box and with a flurry of wings it had the little one in its beak and was off. 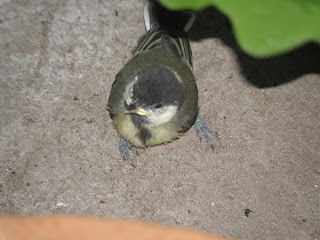 Just look at this perfectly formed little bird, his little feet with his long claws and cute little beak, don't you just love it?
We have spend hours sitting in our conservatory watching these being fed over the past two weeks, the parents have been so busy, I was worn out watching them! Its lovely to see the little ones starting to fly, what a wonderful world we live in
Posted by Chris at 08:40

I have just had a similar conversation with hubby about nature: we have loads of sparrows and other birds, but he wants to kill anything sluglike and daddy longlegs, and I have had to point out that if you destroy one part of a cicle you destroy them all. magpie seems cruel but somewhere there are baby magpies, desperately hungry, and they too have a function in our ecosystem: I have had to persuade him to just put a few slug pellets around the plants we really love rther than scatter them like grass seed. It is all about balance. Fantastic photos by the way: well done ;-)

What a cutie. Shame about the magpie but unfortunately thats nature for you.

It's so cute.I love little birds.

Very cute, we're sitting in the conservatory observing too, Mr & Mrs Blackbird will not let us sit at the table outside and woe betide us trying to put the umprella up to sit under it. I know they are fiercly protective but i'm sure the little ones must be about ready to come out, seems ages since they started to feed them.

Oh what a cute little birdie!!
Thank you for sharing these photos with us.
We lost our lovely cat at the weekend,He was hit by a car.
That cat was like a baby to me .
I have cried so much that my eyes are hurting ,this little bird made me think about all new life around me...

What a sweet little fella...hugs, Linda