These are photo shots of Michael during his changes. 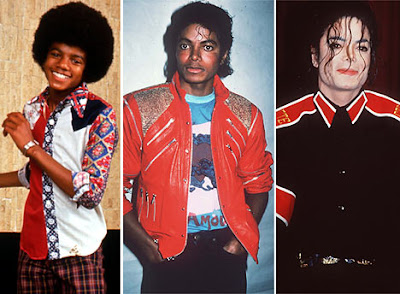 I wonder if you’re feeling like me over the sudden death of Michael Jackson?

I am heavy hearted and feeling quite sad that he has died., I loved his songs and his music , and yes he has had so much said about him, the rumours and court cases in the last few years but his talent and musical ability out shone all that for me.

I still play the cds I bought years ago and love to watch his moon dance and Thriller dvd… what a loss to the musical world. When I bought it my youngest son said ..... you bought a Michael Jackson???? But I loved his sound! Very sad he was indeed a little boy lost... such a shame

When his Earth Song was first recorded I was working in a school that was 8 minutes drive along country lanes from where I lived and I used to play that tape (in those days!) so loud in my car driving to work I am sure it could be heard before I arrived!! Such a sad young man and all those ops to change his appearance…

An early end to a sad life. He was a prime example of what early fame and an over ambitious father can do to a person. He spent his money trying to recapture the childhood he was robbed off by being forced to go on the road at such an early age by a manipulative and greedy parent. Luckily the other Jacksons being older when that happened don’t seem to have been so badly affected. I just hope that the media don’t fill their pages with speculations about his private life and will let him rest in the peace he never knew in life.
Posted by Chris at 19:22

Totally agree. He was an amazing performer, I loved his music too. Like you I hope the other stuff is given a back seat, it's not relevant anymore. Let's just remember his fantastic talent and let him rest in peace.

Thanks for the comments about the Mailart. I'm going back to the drawing board as I don't think mine is good enough!

Michelle put a stamp on the envelope she stitched and then I assume the post office put it into another plastic one to protect it, with more stamps and a recorded delivery stamp.

She had one mailart disappear en route which must have been so annoying, all that time spent on stitching so recorded delivery is a good idea. Probably a lot less likely to go missing.

A sampler I sent to Spain hasn't arrived and it's over 5 weeks now so I assume it's lost. It's not so much the cost it's the time and effort.

Very sad, and still very young for this day and medical science advances