It was my birthday on Monday 20th Dec.. I hate it this time of the year, it seems sometimes to get in the way of Christmas. We had travelled to my house in Essex as it is nearer for my family to come to and we had planned a family get together on Saturday, but because of the snow, nobody could come. So I was disappointed but I didn't want them stuck on motor ways in snow or have an accident. So it was just my lovely DH and me! These are the lovely earings and the bracelet that he bought for me. And I love them.
We went out for an Italian meal together on monday. which was very nice and the red wine too.
And I have had loads of cards from friends so thats nice too and some lovely presents. 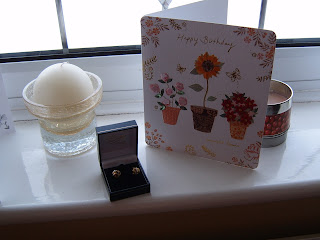 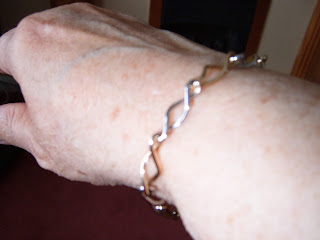 My son and his wife did come on Monday afternoon in between snow showers, and so we had mince pies and cups of tea and it was lovely to see them. And we drove back via a very snowy Cambridge to see my daughter and grand children. When we went in the two boys were out in the snowy back garden and hyper already and my lovely 16 year old grand daugher was still in bed but arrived half an hour later fully made up!

We are now back in Coventry and it is snowing hard, so once again I am indoors! I am afraid to walk out in the snow incase I slip. Last February my friend Peta fell and broke her shoulder and was off work for three months and couldn't even dress herself the first few weeks. And just think not being able to stitch for weeks and weeks, I couldn't face that so I am happy to stay inside!
We brought all the extra food back so we had plenty of  tea, milk, bread, cake, chicken, ham, a cooked potato with bacon and thyme in cream cheese sauce dish, coleslaw, trifle, (half eaten as we have eaten some,) crisps,tasty Indian bits to dip in sweet chili sauce, prawns in pastry, sausage rolls and ice cream and lots more! So if you fancy a party .....don't phone, just pop in!!! We have enough to feed an army!
Happy days!

I think you have the right idea: stay in, stay warm and stay safe.
xxxxx

Merry Christmas to you both :)

Happy birthday!!!!. I'm sorry to hear about nobody being able to go but it was the best thing if the weather was so bad. Enjoy your presents and your holidays.

Happy Belated Birthday. Sorry the snow got in the way. Your bracelet is lovely. I shall know where to come if there is a food shortage lol. Happy Christmas. Look forward to seeing your stitching in 2011.

I've been away from the computer because my grandbabies have been here but they left yesterday:(

I don't wear any jewelry but even I would love that bracelet. It's beautiful. Delicate and classy!!

Belated happy Birthday.Sounds like you won't need to go out with all that yummy food.Just got my Christmas shop today.

Belated Happy Birthday from me Chris and I wish you and yours a happy and peaceful Christmas and good wishes for the coming year. A x

Happy belated birthday to you, Chris, and wishes of health and happiness for life.